Unionization and the workplace 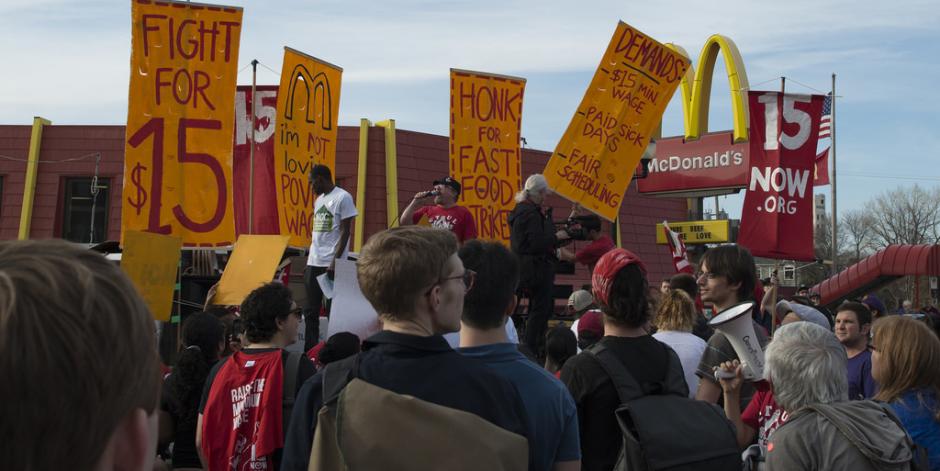 Because many traditional union jobs are now being outsourced to less expensive foreign workers, the unions have focused on industries where the work cannot be transferred abroad, including the service industry. If employers prefer to avoid unionization, they are advised to learn what is important to their employees and to demonstrate that they intend to meet those needs.
​

Open the door to communication

This could also protect employers from charges of permitting a hostile workplace or wrongful termination.

Ensure that employee wages are on par with competition

Employers are advised to stay informed about the benefits and working conditions offered by their competition and to make an effort to provide similar wages to their employees.

Employees will feel they work in a fair environment when they understand what the company expects of them and see that the company’s policies are administered fairly.  Employee handbooks should always be readily available and establish clear and fair policies. Employers should also broadcast policies widely so that everyone is aware of companywide rules at all times.  In addition, the policies must be more than mere words on a page.  They must be evenhandedly administered throughout your organization.

Recognizing good work with raises, bonuses or other perks such as days off will raise company morale. Employers should also prevent a collective drop in morale by properly disciplining poor performers.

Maintain a clean and safe workplace

Clean and safe work conditions include but are not limited to:

Poor performers may believe their problems aren’t their fault and blame management for their own failures. Employers are encouraged to interview candidates thoroughly and to check their references as best possible. Also, new rulings have permitted union “salts”—union organizers who apply for a job in a company they want to unionize—to continue their organizing campaign while they are on the company payroll. As long as they are performing their job adequately, the employer may not discipline or terminate the salt on the basis of the worker’s union-related beliefs or actions that may be contrary to the interests of management.

Union organizers sometimes target separate departments of a restaurant (for example, the kitchen staff) because it can be an easy way to gain a foothold. It is more difficult for a union to persuade large, diverse group of employees to unionize than it is a small pocket. Fostering morale by promoting a team-oriented workplace can help prevent targeted departments from being swayed by union organizers.

Managers must recognize what organizing activities are protected. Threatening employees who are attempting to unionize can result in a costly, time-consuming unfair labor practice charge or lawsuit with substantial liability. Even a few comments from an untrained manager (e.g., “We will never allow this union to come in here.”) can cause major issues for the employer and make it easier for the union to get a foothold. Employers are advised to train managers on the dos and don’ts of unionizing efforts. Managers must also be aware of protected and unprotected employee activity (see below).

Unions usually begin the organizing process by confirming interest on the part of employees, often by handing out cards or petitions so that employees can pursue a union bargain with management on the union’s behalf.

No-solicitation rules limit solicitation by non-employees, such as union organizers, as well as by employees during working time and in working areas. Such rules have been used by many restaurants. Bear in mind that these rules must be implemented uniformly. For example, permitting some solicitors but prohibiting union solicitors is an unfair labor practice.  In addition, rules regarding solicitation must now take into consideration employee and union use of social media.  If your current policies are silent regarding the use of social media for solicitation, you should have then reviewed by counsel.

Some early signs of union activity include:

Under the NLRA, employers may not discriminate, discharge or retaliate against any employee for engaging in “protected, concerted activities.” Such activities may include the employees’ refusal to work or their discussion of their comparative wages and salaries (in person or over the internet/social networking websites), even if the employer does not like these activities. The NLRB has held that an activity may be protected even if the employees have never told the employer they are dissatisfied. That is, employees do not have to give their employer advance notice of their concerns before initiating a work action. Further, the employees do not have to be “reasonable” in what they are seeking from the employer. As long as the employees are addressing what they think is a work-related problem, their activity can be protected.

Activities may be unprotected if they are illegal or violent.

Activities are “concerted” if they are not solely concerned with an individual employee.

Picketing: Employees have the right to picket. However, the time and location of such picketing may be determined by a contract or collective bargaining agreement between the employer and employees. If no such agreement exists, employees may generally picket on public property or any property of the employer that the employer has designated for picketing. If no such area is available and the picketers come onto the employer’s property, this could constitute trespassing.

Company unions: Company unions are defined by the NLRA as employee committees or groups that appear to engage in collective bargaining for employees, but are really hand-picked employees by the employer, fulfilling the employer’s agenda. Such “company unions” are unlawful.

Solicitation and election: Union organizers will attempt to drum up interest in a unionization vote by discussing union benefits with employees and passing out literature. As noted earlier, employers have some power to restrict this solicitation. Oral solicitation can be restricted to an employee’s non-working time, although it can take place in both working and non-working areas. (Note: “Non-working” time means more than official lunch and rest breaks—it includes any time an employee is not actually working.)

Distribution of written literature also may only take place during non-working times, but an employer can restrict its distribution to non-working areas (e.g., break rooms, locker rooms, parking lots). Normally, the employer can prohibit non-employees (i.e., union organizers) from entering the premises for solicitation. If a union gets 30 percent of the employees in an operation, that constitutes an appropriate bargaining unit to sign “authorization cards.” The union can show the NLRB that there is a “sufficient showing of interest” among employees to justify the holding of an election to determine whether more than half of the people in a unit want the union to represent them. If more than 50 percent vote yes, the union will be certified as the legal representative of the employees in that unit.

Retaliatory treatment: Any form of retaliation for engaging in protected activity violates the NLRA, whether or not the employee is ever discharged for the activity.

It is important to remember that an employee’s act that would be insubordination under company policy (such as refusing to work an extra hour) could be protected if it is concerted and related to working conditions (for example, if several employees refuse to work an extra hour to protest inconsistent work schedules).

If an employer sees the beginnings of a union movement in their workplace, they should immediately contact a labor lawyer or other professional with expertise in unions and union organizing. Union organizing is complicated and the unions will usually use experienced, convincing organizers who know the rules and boundaries to persuade employees. If an employer wants an equal footing, they will probably have to hire their own campaign team and legal team to make sure that their views are communicated to the employees by permissive means. Also, employers must be aware that some employee activities that might be prohibited in normal circumstances become protected under the NLRA during a union movement. By the same token, other activities become illegal. (For instance, improving employee benefits at the beginning of a union drive could be considered retaliation against the union effort.)

Employers may not make changes in benefits during an election campaign unless that change was planned before the union’s representation petition was filed. By the same token, the employer may not hold back a scheduled increase in benefits because of a union drive.

Employers may not discriminate against employees regarding hiring, tenure or condition of employment in order to encourage or discourage union activity.

Employers may not use surveillance tactics (e.g., photographing employees handing out literature or eavesdropping on restroom conversations) to keep track of union activities.

Employers may not question employees about union activities, even if the employee willingly answers the questions and there is no threat from the employer.

Employers may fire, lay off or transfer employees for genuine economic reasons or for good cause, such as insubordination or sloppy work, whether or not the employee is involved in the union drive.

Employers may not refuse to hire qualified applicants for jobs because the applicants do or do not belong to a union.

Employers may not demote employees because they circulated a union petition among other workers asking the employer for a pay increase.

This report was reviewed and updated in 2020 by Weintraub | Tobin. Weintraub | Tobin provides this information for general informational purposes only. The information is not, and should not be relied upon or regarded as, legal advice. No one should act or refrain from acting on the basis of such content or information, without first consulting with and engaging a qualified, licensed attorney, authorized to practice law in such person’s particular jurisdiction, concerning the particular facts and circumstances of the matter at issue.